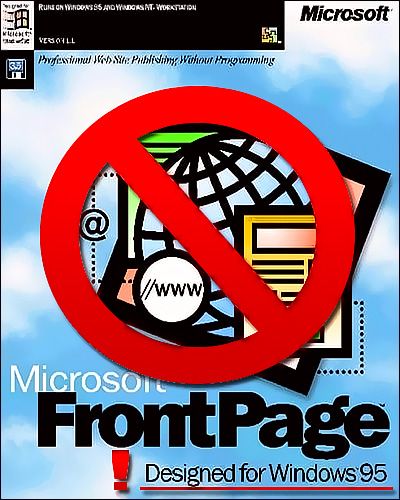 Exactly what will change?

The first phase will occur on September 1, 2011. After that date, it won’t be possible for customers to activate new “FrontPage Server Extensions” on our servers, although existing sites that use FrontPage will continue to work normally.

The second phase will happen on September 1, 2012. After that date, FrontPage Server Extensions will be completely removed from our servers. Any special FrontPage hit counters, guestbooks, feedback forms, or search boxes you’ve created will stop working (although the basic site text and images will still appear). In addition, many people using FrontPage 2002 and earlier will no longer be able to publish changes to their sites from within the FrontPage program.

Why is support for FrontPage Server Extensions being discontinued?

Microsoft hasn’t sold the FrontPage software for more than five years — but that’s only part of the problem. To support special FrontPage features on our servers, hosting companies need to use separate, special “FrontPage Server Extensions” software created by Microsoft. Unfortunately, that software hasn’t been updated in more than ten years, and won’t be updated in the future.

Our engineers have determined that it would be very difficult (perhaps impossible) to make the old FrontPage Server Extensions work with the new Apache 2.4 Web server that we plan to switch to in late 2012. Because of that, we’ll then need to remove the software from our servers.

We’re not unique in this. Most hosting companies have already stopped supporting FrontPage, and most of the rest will probably stop in the near future.

What should I do if I use FrontPage?

Our recommendation is that you switch to a different Web design program or WordPress before September 2012. Convert or create your pages using the new program, then disable the existing FrontPage Server Extensions for your site and publish the new pages. If you do that, you won’t need to worry about anything.

If you’re not sure what program to switch to, we do recommend WordPress.

What if I’m still using FrontPage after September 2012?

If you use FrontPage 2003 on your own computer, you may be able to continue using some parts of it:

If you’re unable to switch your hit counters or feedback forms by September 2012, we can help you with this or do it for you at no charge. (This is an exception to our usual policy of not changing the content of customer sites, because it’s caused by a change on our end.)

Unfortunately, if you’re using FrontPage 2002 (or an earlier version) on your computer, publishing using FTP probably won’t work because it doesn’t include the necessary “passive FTP” feature that’s needed if your connection is on a DSL or cable modem. You will need to switch to something else.

If you have any questions, don’t hesitate to contact us and we’ll be glad to help.